Coming to you from a secret, undisclosed location in Bulgaria’s capital, I will brief you on the essentials of the modes of public transit available to you in Sofia and their respective costs and quirks.

There are four different types of vehicles operated by the Sofia Urban Mobility Centre (Sofia’s transit authority). All the bases are covered, except for water: the colourful “fleet” includes no boats, but it does have:

Trolley bus (тролей): on wheels, supplied with electricity through electrical wires running above it. 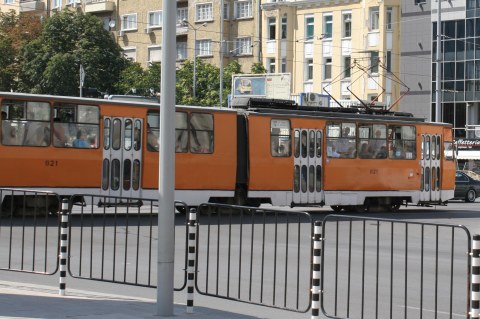 Tram / streetcar (трамвай): runs on rails, supplied with electricity via electrical wires above it.

Metro / subway (метро) – runs on rails, mostly underground, supplied with electricity via one of its rails.

The visual appearance of each vehicle may not give you immediate clues as there are many different generations, colours and appearances of each type. The best way to recognize what you’re dealing with is to check for wheels, wires and massive underground tunnels.

The reason recognizing different types of vehicles matters is that Sofia municipality is not tremendously creative in its numbering and often there will be a bus and a tram, or a tram and a trolley that share a number but describe entirely different routes.

You can board all city vehicles from any door, and they all stop at every stop, so requesting stops is not required.

Sofia’s transit system requires a new single fare for every new vehicle you board, even if it’s part of the same journey.

You can pay a single fare in one of four ways:

1. Purchase a single-ride ticket (билет) for 1 Lev from a SUMC kiosk or a newsstand at most bus stations. Trolleys, buses and streetcars use the same green ticket. Upon entering the vehicle, validate the ticket by inserting it into one of the tiny perforator boxes strewn along the vehicle’s windows at eye level. Push the end with the triangle in as far as it will go, then lift the metal tongue up until you hear a click. When you release the tongue and remove your ticket, it should have several holes punched into it, making it valid as payment for your trip.

Subways have their own blue single-ride tickets. You can buy those at every subway station, and they’re validated by inserting them into a subway turnstile on your way in.

2. Deposit 1 Lev in any combination of coins into the grey box found immediately behind the driver’s seat in trolleys and streetcars. This option is not available on buses or on the subway. When the ticket comes out, pull it down, not up! These tickets do not need to be punched to be valid.

3. Buy a set of 10 single-ride tickets (талони) for 8 Leva from a kiosk or newsstand. These work on buses, streetcars and trolleys. They are numbered, and each one should be validated like the single-ride tickets in option 1. They are valid as long as you have ticket #10 in your possession, and they are non-transferrable, meaning that only one person can ride on each set of 10 at a time.

4. Use an electronic chip card. These can be purchased and reloaded in increments of 10 trips for 8 Leva at the bigger SUMC kiosks (notably at Sofia University and Serdica stations). They are very similar to London’s Oyster cards. You can enter the subway with them by validating them at the turnstile. On trolleys, buses and streetcars you should touch the yellow validator box which looks like this:

If the green light goes, your trip has been validated. If the red one goes, you might be out of trips or there’s a reader error.

You can also buy passes for unlimited travel for one or all lines. There are 1-, 3-, 6- and 12- month versions, personalized or not (non-personalized are slightly more expensive), but they’re somewhat hairy – some are only valid for the subway, and their cost will rise when the second subway line is opened at the end of August. Your best bet for a transit pass is the 4 Leva 1-day version. You can buy it at most ticket stations, and it is valid for all lines and modes of transportation. Make sure you specify the day you want to use it as it has to be validated at the kiosk, you can’t punch holes in it yourself.

If you have luggage measuring more than 40x40x60 cm (15 x 15 x 24 in), you have to pay an additional single fare ticket for every trip. With lots of luggage, you’d be better off taking a taxi.

There are designated fare officers who board buses and inspect tickets. They are often incognito, whipping out ID cards once everyone is on the bus and seems to be in the clear. They patrol in pairs and if you fail to show a paper ticket, they will issue you a fine for 20 Leva, letting you continue your trip or they’ll ask you to get off the bus. Incidentally, if you fail to validate a chip card, the fine is only 1 Lev.

You are currently reading Public Transit in Sofia at Blazing Bulgaria.