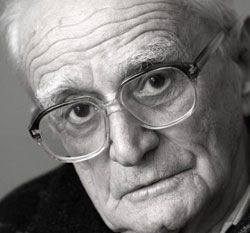 Poet, playwright, screenwriter and translator, Valeri Petrov (pseudonym of Valeri Nisim Mevorah) is one of the most multifaceted talents in Bulgarian literature. In prose, verse and translation, his style is crisp, light and accessible and every rhyme underscores the beauty and melodiousness of the Bulgarian language.

Born on April 22, 1920 in Sofia, Bulgaria, Valeri Petrov studied in the Italian Lyceum in the capital and completed a medical degree in 1944 in Sofia University. He served as war correspondent during World War II and worked as a physician in a makeshift military hospital in Rila Monastery.

The range of his work is enormous. He’s published scores of poems, including “In the soft autumn”, winner of the Georgi Dimitrov prize for literature. He’s written the scripts for four films, including “Yo-ho-ho” and “Knight, No Armour”, and several live-action and animation shorts. He’s the author of “Five Fairy Tales” – a collection of children’s fairy tales, bedtime reading for generations of Bulgarian children, for which he was listed in the International Council for Children’s Literature’s honour roll.

Petrov is also an accomplished translator from Russian, Italian and English. Alongside his translations of Gianni Rodari and Sergey Mihalkov and Rudyard Kipling, his poetic translations of Shakespeare’s comedies, tragedies and historial dramas are the most valued such translations in Bulgaria and have released and performed multiple times.

On May 24, 2006, Valeri Petrov was honoured with the prestigious “Hristo G. Danov” prize for overall contribution to literature, and on September 17, 2010, already 90 years old, he was awarded the Sofia award for lifetime achievement.

A Cry from Childhood

Why must it come just now to trouble me,
This sudden, shrill, and dreamlike cry
Of children calling “Valeri! Valeri!”
Out in the street nearby?

It is not for me, that distant childhood call;
Alas, it is for me no more.
They are calling now to someone else, my small
Namesake who lives next door.

Though such disturbances, I must admit,
Are troubling to my train of thought,
I keep my feelings to myself, for it
Would be comical, would it not,

If, from his high and studious retreat,
A gaunt old man leaned out to say
“I can’t come out” to the children in the street,
“I’m not allowed to play.”

Photos from the Archives

Those manly brows, those eyes so steady,
Those mouths unwilling to betray
And under them those thin necks, ready
To wear a gallows-rope next day:

Old Nazi archives saved for us
These pictures of our friends who died.
Mug shots, we know, look always thus,
Full face and profile, side by side,

Yet sometimes guilty thoughts arise
Which make us fancy that these men
Have looked once deep into our eyes,
And turned their faces from us then.

A Song About Friendship
from Winter Tale (Five Fairy Tales)

“Best friends”, they are professed,
but what makes one really “best”?

Is it because he’s first to pounce
into the fire to save you, first
without an ounce of doubt about
whether you’re best or worst,

First for you steps on the ice,
First for you his blood he sheds.
That much, it would suffice
To know this friend is “best”.